The Wild Atlantic Way is a 2,500km stretch of costal roads which stretch from Kinsale in County Cork in the south east corner of the Republic of Ireland across to the Ring of Kerry on the west coast and all the way up to Londonderry on the north coast in Northern Ireland.

As part of my Birthday mini adventures my plan was to start in Kinsale and drive the Wild Atlantic Way from Kinsale to Tralee passing along the Ring of Kerry and overnighting it at Ballyskelleg before continuing onto Tralee to meet my Aunt Mary and heading back to Dublin. I had previously already completed from the Wild Atlantic Way from Tralee almost all the way to Galway and truly enjoyed it so the idea of doing more of the drive was an easy temptation.

I started my morning by having breakfast in Kinsale, as usual I was up well before most Irish and most of the town was still sleeping. I enjoyed a scone and hot chocolate in a hotel overlooking the marina before heading off to have a look at the famous star shaped James Fort which overlooked the city. Although the fort didn’t open until 10am I was still able to admire the building and enjoyed the alternative view of Kinsale.

My next stop was the Drombeg Stone Circles just past Rosscarbery about an hour from Kinsale. I don’t remember actually ever seeing a stone circle in real life before and I was a little superstitious about actually walking into the circle itself. Instead I stood on the outside, read all of the information about the circles and sat up on an embankment admiring the stone circles and their incredible view. When the bus load of tourists had finally departed I took my photos and I too jumped back in the car and headed on my way.

I had originally planned to stop in Skibbereen for lunch, however after not having a very warm welcome from some of the locals and not seeing any café or restaurants of interest jump out at me I decided to head on and try my luck at Bantry House, my next destination.

I was not disappointed, Bantry House was amazing. They had a small kitchen / café set up there which had the standard offerings but the food was good and views were amazing. The house was opened up to the public about 40 years ago and the gardens are still in the process of being done up to the state they were in, in the height of the households wealth but already it is quite beautiful to see. Part of the house is also open to the public and tours are offered twice a day to visitors, by accident I had just finished my lunch as one of these tours was about to start and I was very impressed by our guides knowledge and passion for the house. After 2 ½ hours of lunching, touring and strolling around the gardens I was behind schedule and quickly jumped in the car again and headed off. I was disappointed I didn’t have more time for Bantry village as it looked like a town I would have liked to see more of.

Finally I was on the famous Ring of Kerry and following the winding roads to Ballyskellege. The sun had kind of come out and I was surprised to see calm little bays with sandy beaches that looked like Australian beaches. The water was so clear, and not so cold for an Australian to put their feet in, and I could imagine if it was a few more degrees warmer I would even consider swimming. 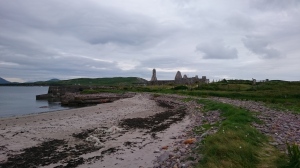 Ballyskellig was not quite a village, it had a pub, a café and a gas station that probably sold bread and milk as well, and a few B&B’s and a hostel but it was all I needed. I settled into the hostel where the owner gave me a guide to the area advising how to get down to the beach, about the little castle and abbey ruins in the area, and how to get from the beach to the pub for dinner. I was set, and went out to explore the area – during my explorations I mused on how nice it would be here in winter and was pleasantly surprised to hear from the owner of the hostel that she stayed open over Christmas for people like myself who wanted to get away from the city.

The next morning I was up early again and on my way to Tralee for the final part of my journey. I had hoped to find breakfast on the road, but apparently breakfast before 10am in this part of the country was not going to be easy to find. Instead I stopped to visit the Kerry Bog Village, a life sized replica of what a bog village was like 100 or so years ago. It was fascinating to see, though the commercialisation of Red Fox pub and its ‘Irish Coffee’ connected to this tourist attraction did ruin it a little for me.

I eagerly arrived in Tralee just before 11am to meet my Aunt Mary for brunch. Again being a Sunday all we could get before 12.30 was some scones and tea, but the opportunity to catch up with Aunty Mary and discuss what I had been up too since arriving in Ireland distracted me from my search for a real meal.

The end of brunch was really the end of my mini holiday, there was nothing now to do but start the 4 hour drive back to Dublin, return my hire car and head home. It was a sombre return and 45minute delay in Adare didn’t improve the journey. But the return home gave me a lot of time to reflect, I had had an amazing few days and it reminded me of my initial goals when I first came to Ireland to buy a car. So after a great couple or relaxing days away and fresh perspective on my new life here I am ready to get back into the full swing of establishing my new life here in Ireland. 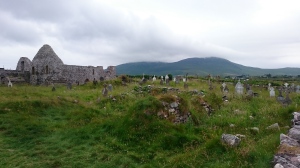 To find out more about the Wild Atlantic Way, Kinsale, Drombeg Stone Circles, Bantry House and Gardens, Ballinskelligs, The Kerry Bog Village or Tralee please click on the hyperlinks.